The study from Padron A. and Rojas S, “Comparative study of high and low intensity percutaneous electrolysis in patellar tendinopathy.” has been performed under methodological rules that does not fulfill CONSORT statements (specially due to lack of sample size calculation, randomization and masking techniques), which negatively affects to the study scientific rigor. Apart from that, statistical analysis has not been raised up properly, thus, data collected have a very doubtful validity. 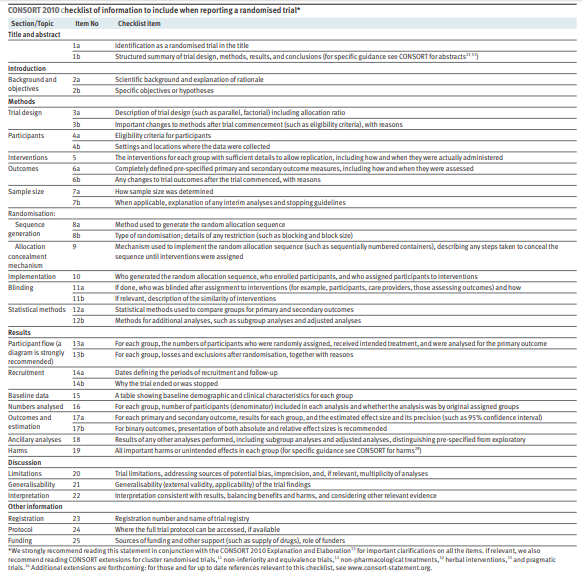 Table showing different aspects to consider when communicating a Clinical Trial, according to CONSORT rules

In table 1, final conclusions from the analysis are brought forward with respect to the NON fulfillment of CONSORT rules:

Hereafter, methodological biases that prevent from giving consistency to collected data from this study are shown.

In relation to the study sample:

In relation to the evaluation process:

Moreover, an instrumental analysis has been conducted. It is not understood that 3 devices have been used since there are only two study groups. In any case, if someone wants to perform any study to compare all 3 devices, it needs to be, on the one hand with the minimal intensity given by each device and, on the other hand, with the maximum intensity that each devices has detected as the maximum eligible. Besides, the experiment should be launched with patellar tendon, rather than brachiorradialis muscle, because the trial is targeted to treat patellar tendinopathy.

With regard to results:

First item to study is the sample normality, in other words, to know if both groups follow a Gaussian distribution (normal). To this effect, Shapirowilk study is applied (because N is below 30) for the QUANTITATIVE variables. In order to classify a sample as normal, there must be one of the following instances:

Even in these cases, if there is no normality study because it is unknown, with N sizes lower than 20 subjects in each group, no sample normality has to be assumed. Therefore, medians and interquartile ranges (IQRs) and no parametrical tests have to be picked in order to implement the statistical analysis.

Based on if sample is normal or not, parametrical or non-parametrical test will be used respectively. The aim is to determine if there are statistically significant differences among the different variables from the sample, because if this is affirmative, variables would become confounders. In this study, age is the only difference shown, authors have assumed sample is normal because they refer to average and SD values, which is not true.

Mann-Whitney test is performed in all analysis, which is a non-parametrical test (when anyone knows if sample is gaussian or not, it is mandatory to assume that it is not) for non-paired data. The justification of the election of this test is somehow “peculiar” and with no bibliographic reference. Anyway, being a non-parametric test, median and IQRs values should have been selected. Furthermore, SD is above a quarter of the average value (one of the indispensable requirements to choose the SD).

Moreover, an intragroup analysis is recommendable to be performed in experimental studies, reason why Wilcoxon test should be used (non-parametrical and paired data).

With regard to discussion: