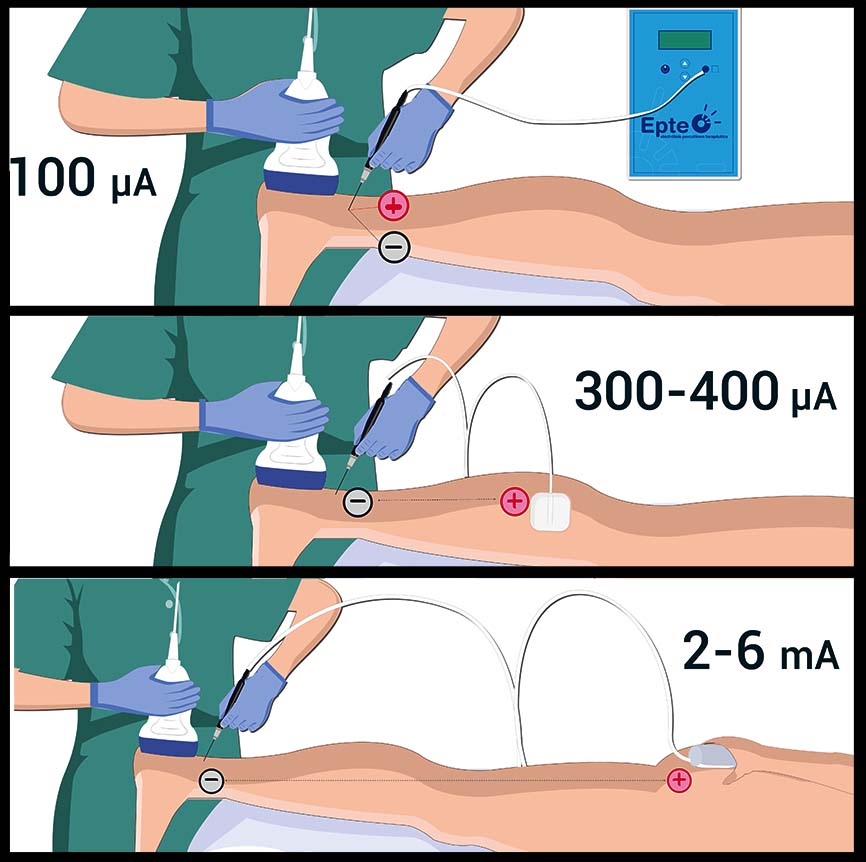 The interpolar distance (distance between the two poles anode and cathode) has a main role in the electric safety when the electrolysis technique is applied. Galvanic current flows through the tissues between the two points, and will affect them depending on their degeneration level: pathologic tissue has a lower resistance to current electrical flow (electrical resistance) due its physic and biological features.

Both in the cathode and anode (negative pole and positive pole) some histologic changes will be produced due to electrical current. When percutaneous electrolysis therapy is applied, the needle plays the role of the cathode. Its narrow surface focus the galvanic current action in this area.

Electrical current flows from the cathode to the anode and induces some biological changes in tissues through its path. As a consequence of the path of the electrical current, the pathologic tissue is decomposed. The current flow applied with therapeutic and recovery purposes gets positive effects according to decrease pain and improves function when with EPTE® percutaneous electrolysis therapy is used, thanks to the almost painless micro-currents, in addition to another improvements as the reduction of the distance between poles.

Interpolar distance: anode as a handle

Some electrolysis percutaneous devices use a handle as an anode, that must be hold by the user with his hand. With this handle grabbed, the electrical circuit is closed between both poles. Thanks to its area, the electrolysis effect in this anode surround is dispeled (acid burn). However, it is located far away from the clinical point of treament, so the current, although in a less density (current / area) will move through the patient’s body, through some tissues and even vital organs.
The interpolar distance is longer. Because of this the electrical resistance will also be greater and a higher voltage (potential difference) between the electrodes will be necessary to reach the electric current choosen for the treatment.

This is the solution introduced by EPTE® in relation to the interpolar distance: the anode is placed as close as possible to the needle, in contact with the skin. A contact electrode, with an area of 2,500 square millimeters is placed 10 centimeters from the point of the needle approach. The biological changes in the tissues are more concentrated in the proximity of the needle due to its smaller surface (same intensity, less surface means more density of treatment). At the anode, due to its bigger surface, therea are less changes in the biological tissue because of the lower current density. The proximity between the needle and the electrode (interpolar distance) ensures that there is less non-pathological tissue exposed to the electric current. It also menas that the potential difference (voltage) between anode and cathode will be less.

Bipolar needle: both poles in an only element

The bipolar needle is one of the projects Ionclinics (the owner of EPTE®) is developping. The study “A new and revolutionary approach for the diagnosis (Electrical bioimpedance spectroscopy) and treatment with electrolysis (EPTE®) of tendon and muscle injuries with a Bipolar Needle“ was submitted in the Muscletech Network 2015 edition, celebrated in the Camp Nou stadium (FC Barcelona). Authors: Javier Herráiz Garvín, Rosalía de Dios Álvarez, Esther Sánchez Rodríguez, Rosa Lorente Ramos, Elena Barcina García, Daniel Martín Vera.

Thanks to the bipolar needle. both poles will be in the same element, with a high reduce of the interpolar distance. The negative and positive poles are located in the needle, in the concentric space and on the needle surface. The electrolysis occurs in the same way but the current barely moves from the area located by the therapist, allowing to focus the treatment even more. The bipolar needle will mean a great advance in safetyness in the application of this invasive physiotherapy technique, the percutaneous electrolysis, which uses microcurrents for the treatment of pathological tissue. The use of this kind of needles for the application of electrolysis is protected by a patent of Ionclinics SL.

Maybe you could be also interested in reading these articles: