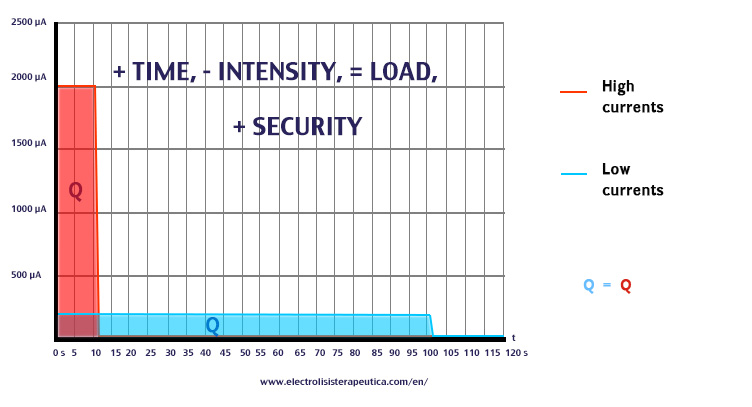 The amount of decomposed substance in its basic substances (electrolysis) is directly related to electric charge, and therefore it depends on intensity and time, according to the First Law of Faraday about electrolysis, based on his electrochemical researches, published in 1834 and accepted by all the scientific community. In the next post, it will be described the relationship between intensity and time and safety aspects in electrolysis application.

Intensity and time in the treatment will determinate the ELECTRIC CHARGE applied in the tissue. This electric charge is measured in coulombs.

Electrolysis occurs when a continuos current (galvanic) is applied using a pair of electrodes, connected to an electric energy source through a solution (also named electrolyte). In the case of electrolysis applied with therapeutic purposes, the patient and his different tissues are the electrolyte.

Using electrical current with therapeutic purposes always means a risk for the patient, as electricity could cause different damages. The damage will depend on different factors such as the patient’s phsyiological characteristics, the ambient factors (wet, dry,…) and the electric current features (continuos, alternate, frequency) and most of all, the intensity of the current through the body and the time.

To reach the desired electrical therapeutic load, there are two options in the market:

In both cases the electric charge will be the same, as it could be seen in the next infography. Charge is a main factor to calculate the electrolysis amount, according to First Law of Faraday. 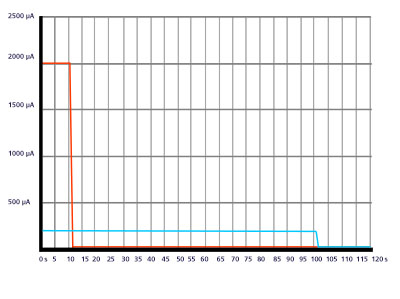 Intensity and safety: law about current effects in human body

In the technical report CEI 479-1: 1994 (adapted to the spanish standard UNE 20572-1), there are exposed the effects of the current in human body and domestic animals. It is described that galvanic current could cause alterations in the skin depending on the density of the current flowing in a determinated area (mA/mm2) and time of exposition. 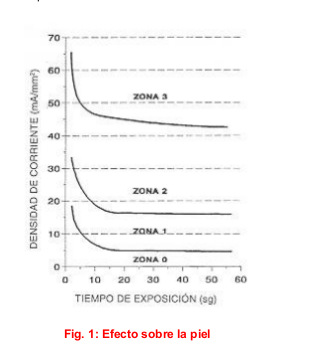 Effect on the skin when current is flowing

There are three zones:

ACCORDING TO THIS IMAGE, IT COULD BE CONCLUDED THAT DENSITY CURRENT IS THE MOST IMPORTANT FACTOR in case of AN UNDESIRABLE SITUATION (DANGER WHEN APPLYING THE TECHNIQUE). TIME HAS LOWER RELEVANCE.

Intensity and safety: an example.

As an example, we will take two values of current density and time of expositon with the same electric charge, to compare them. The danger with higher density current is more relevant than with lower density current:

Finally, if working with high or low electric current, the level of therapeutic current must be gradually reached, according to the standard IEC 60601-2-10 for electro-medicine devices.

EPTE® device, aproved with the CE sanitary label has a double ramp system to reach the maximum current of treatment. Its gradual application has also an effect in pain threshold of the patient, thanks to a progressive adaptation of the patient to the current flow (being progresive, the adaptation will be done gradually) and it also will give the therapist some information about the point of patient discomfort. In case of patient hipersensitivity, if the point of patient disconfort was under the treatment intensity, the therapist would be able to adapt  both paramethers, intensity – time, to get the same electric charge (same Q number) when percutaneous electrolysis is applied.

Intensity and safety. Some references: