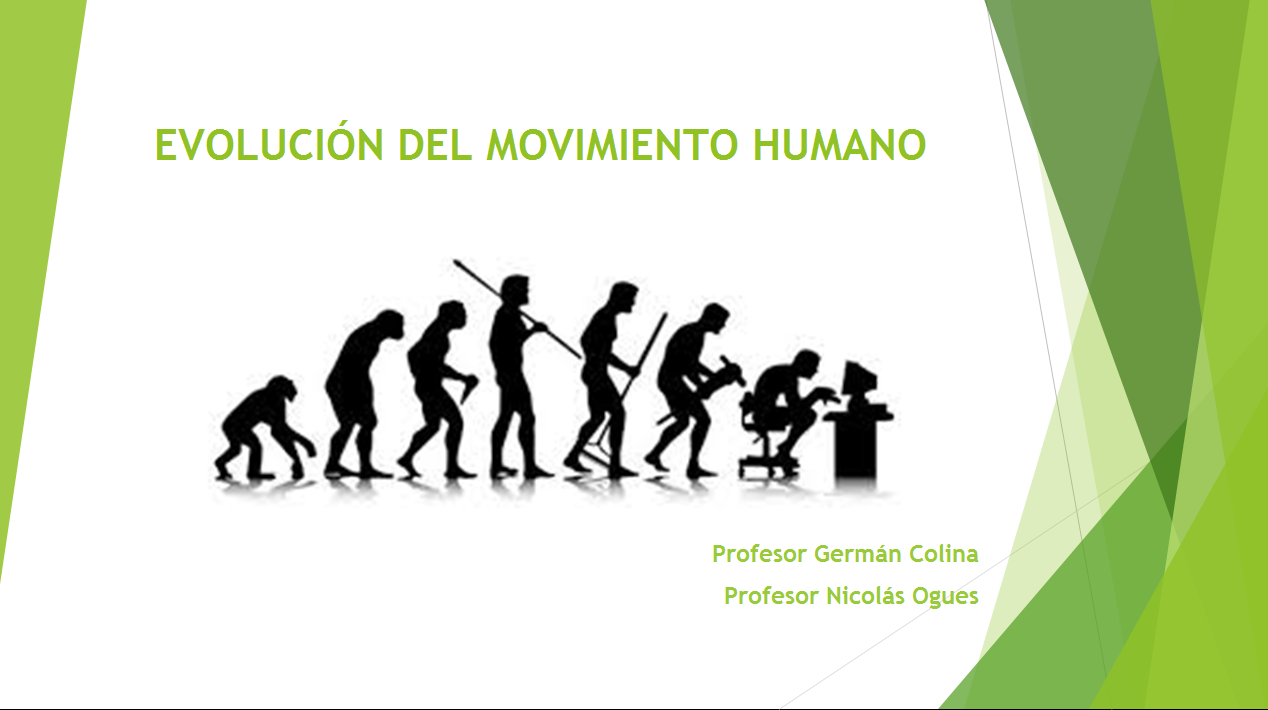 The human being evoluted from nomad lifestyle with a body designed to walk long distances, to a sedentary lifestyle. The human movement evolution (movement as a need, movement as a sport, problems due to lack of movement), the apparition of compensatory formules for the lack of movement and even the evolution to bipedalism are some of the aspects of this text based on the oral presentation Evolución del movimiento humano de  German Colina y Nicolás Ogues.  This is the result of their research and was publicly presentated in the III Jornadas de Biología Humana de Tacuarembó (Urugay).

Evolution of human movement from first hominids: althought the first primates settled the earth surface since 60 millions years ago, we can’t referred to them as “Human” until the Australopythecus appeared, 4 million years ago. The Homo Sapiens is considered to have appeared 200 thousands years ago.  The First step to bipedalism is calculated 3,6 milion years ago. It is, in fact, a crucial juncture. The primate half-walking evolutes to the homonid, who was able to walk straight. This involves an evolution in the morphology of his waist, hip, gluteus,… The human walk , the weight is supported by one leg the most of the time completely straight (it is different to other biped mammals). This morphological adaptation is boomechanically more economic. Professor Daniel Lieberman, assures that this way we save 4 times more energy.

There are some morphological differences between primate, half walkers, and biped human being, specially in gluteal muscles, and specificly in medius gluteus. The apes have a similar muscle, ischiofemoral one, which corresponds to the gluteal mass of human beings. In the evolution towards bipedalism, this area has lost the function of propulsion and has changed it into a function of stabilization of the pelvic area. The apes, when walking, make evident abductions in hip flexor, which involves more energetic expense. The study “Activity and Functions of the Human Gluteal Muscles in Walking, Running, Sprinting, and Climbing” (Jamie L. Bartlett, * Bonnie Sumner, Richard G. Ellis, and Rodger Kram, 2014, American Journal of Physical Antropology) focus on the large gluteus maximus and analysis its activity with an electromyograph.

In the Paleolithic, physical activity was a need. The Neanderthals were animal hunters. Their daily energy consumption 7,000 calories (same level as professional athletes of our time with a large energy demand, as for example Michael Phelps). The Homo Sapiens changed to nomade lifestyle. His limbs were longer, more subtle hands and less body strength. Sedentarism was linked to the agriculture and it means a growth in population.

In ancient civilizations occurs not only the “movement as a need” but the movement for fun. The sport linked to human movement is a point in common. In Mesopotia (4.000 BC) it was not strange to see some sports competition like archery, boxing, swimming competition, race horses, fencing, rowing, wrestling,… In ancient Egypt, human movement had a strengthen purpose and a religious component (weight lifting, water sports,…). In ancient Greece (2.200 a.C – 146 a.C) the nobels has a remarkable link with exercise and physical activity. The concept of “athlete”, Olympic Games, physical education for the war, and even beauty cannon were according to sport practice.

Squat. A complete knee flexion with the backside close to the floor and the heels on the floor, in a complete stretching position. This pattern is kept until 5 or 6 years old. There is a curious difference between asian squat (similar to the babies) and occidental squat. In the asian Squat, heels are completely touching the floor, in a rest position, with a muscular relaxation. In the occidental squat, heels are not completely touching the floor and the relaxation is limited by ankle flexibility. The knee is forward projected, and big muscular groups are on fatigue. This position, Squat, was used for socialization and rest (they don’t use to sit).

Bend pattern. Bending, with with trunk inclination is another primitive pattern of human movement. It involves a greater activation of the hip posterior, vertebral and intervertebral muscles. It is used to bend over and pick up an object on the floor. In it, the cervical lordosis is exaggerated. Another primitive movement pattern is the pattern of rotation. It was used when the first men stood up, and then his visual field increased. This pattern lets him throwing objects and projectiles. It could be found in its rotation and anti-rotation aspect (used more in sports gesture than in daily life). This pattern activates internal and external oblique, that acts as anti-rotators and and stabilizers.

Walking pattern. Human being is a predominantly walker, and he uses only promptly other rhythms of movement. Primitive men walked great distance, but rarely troted or run, because to walk consumes less energy, from a biomechanical point of view. In this pattern, 63% of time the weight of human body is supported in one leg. The primitive men only sprinted when necessary (escaping from an enemy, a wild animal …) The attack pattern is used to traverse uneven terrain, obstacles, and ir is found in some sports and certain work activities. The apes aren’t able to develope this pattern. Their joints are small and they can not do that directional projection. Another important pattern in the evolution of human movement is the pattern of pulling and pushing, widely used in combat, rowing and moving heavy objects.

The chair: reduction of human movement because of technologization

The authors of this paper contrasted these primitive patterns to a common posture, sitting with a laptop on our knees. This is considered a “big bomb for the biomechanics of the human body” as stand Germán Colina and Nicolas Ogues. In this position, the column is virtually a single curvature. It involves wear on the vertebrae, and enhances the possibility of herniated disc. The abdomen is completely compressed. In today’s society we spend 8 to 10 hours in front of a computer. Social life happens in front of a screen.

The authors of this article on human movement highlight the “tetra of modernity as major problems of our society, composed by 4 points. Hyposomnia (primitive man slept 10 to 11 hours. Today it is recommended at least 8 hours a day), stress, high calorie diet ( changing timetables, over-caloric consumption,..) and hypokinesia (lack of movement) These habits may involve metabolic disorders, such even learning and concentration disorders. These bad habits have also a cost: a country in which people compensate this sedentary lifestyle with exercise, it is needed a lower health spending.

Nowadays, there are some sports practice that are not the best solution. The rise of medium and long distance race involves more risks than benefits (although it could be thought the opposite), according to professors Germán Colina y Nicolás Ogues. The human being is naturally a walker, not a runner. The practice of the running has a great impact in locomotor system, and sometimes it is done by people without biomechanical training or even with some years inactivity. Another aspects, like coordinative exercise, equilibrium or even strenght work, to care the bone and muscular mass. Another kind of exercises proposed for sendetary people, hydrogym, helps working movility but “ungravities” the patient and it is not the best for osteoporosis patients (strenght, proprioception, stability, must be reinforced).

Conclusion: the evolution of the human movement and problems linked to sedentarism

Since the beginning of the agriculture until nowadays, the back pain prevalence has increased. More than 90% of the population will have some back problems. Human being has the same genotype that in Stone Age. However, only the 25% of its potential is used. For this reason, the authors propose exercises that reinforce the primitive patterns referred in this article. When training, it is required some propositions to consolidate these movement patterns. Humans are an active being, continuosly moving, a feature that has been lost since the agriculture and farming began (with some poor and repetitive movements that become rutines). The chair is described as the “beast” when talking about posture. Its abuse (sedentary lifestyle, at least 8 hours a day people are sit) could be linked to diabetis, hypertension, obesity, diseases, injuries,… It is proposed a compensatory training, with some exercises to improve the functional balance and eucinesis (quantity and quality of optimal movement) .

How to Eat, Move and Be Healthy (Paul Chek. Chek Institute 2004)

We also recommend this article:

Pain and Brain: how is pain related to the tissue damage and the danger