The hidden sugar in food and drinks 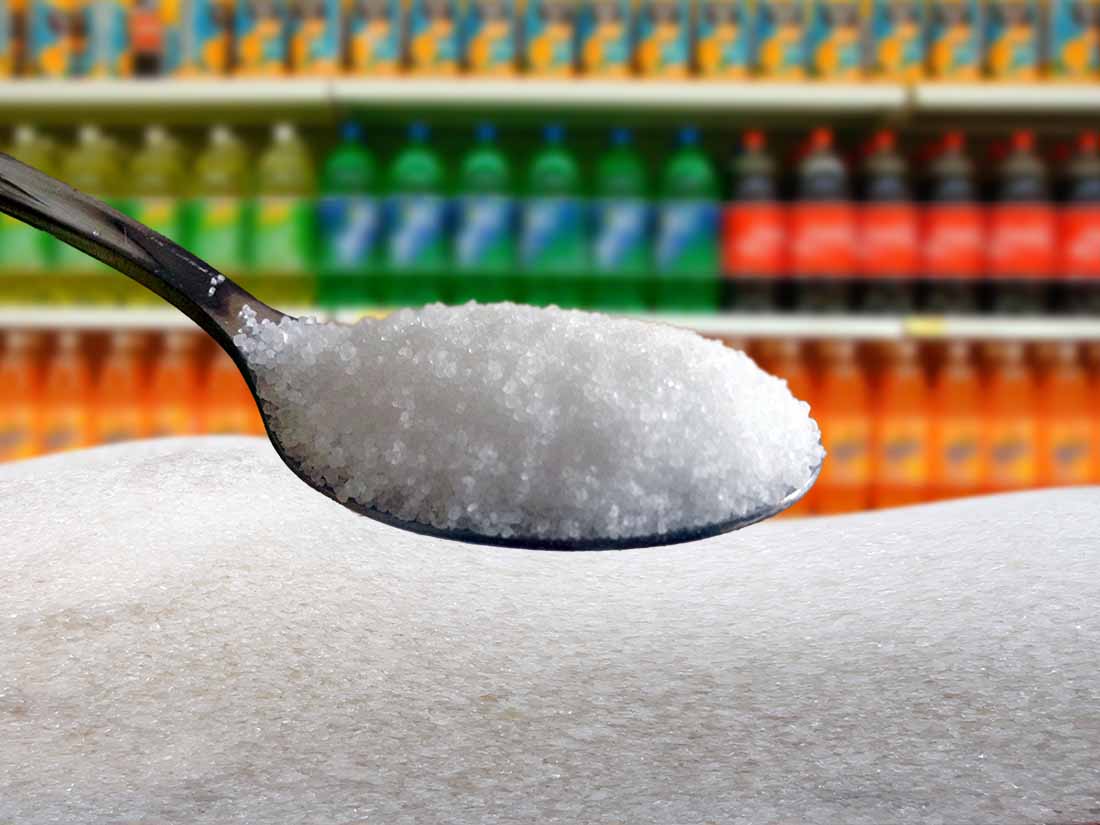 Sugar is a sweet-taste carbohydrate and one of the main ingredient of juices and soft drinks, but this “hidden sugar” is also used in salty biscuits and sauces. According to several studies, an excessive consumption has a relation with obesity; and it could also influence the central nervous system. Why has this extra amount of hidden sugar been used in processed food?

Sugar is present in a lot of packing food, under different names (glucose, sacarose, fructose, dextrose, corn syrup,…) It is a main ingredient of milkshake, juices, porridge, bread, corn flakes,….and also in sauces, snacks and lunchmeat.

The OMS recommend a quantity of sugar of 50 daily grams for a man (it is 12 small teaspons). According to some experts, this amount must be halved until 5% of daily calories. As a packing juice has already 5 teaspoons each 15 ml, a child could already have consumed all the recommended sugar in his breakfast.

“Hidden sugar” could be found in processed food in an amount which will surprise most consumers. Ice-cream, sauces like Ketchup, factored-baked cooks,… has a remarkable average of sugar, an economic ingredient which improves the taste of products.

Soft drinks normally contains high levels of “hidden sugar”, as it is referred in the label. In the case of Cola soft drinks, sugar could reach the 35 grames in a can, the equivalence of 9 teaspoons; 23 grams in orange taste drinks. A considerable amount of hidden sugar is used in Juices, smoothies or even beer.

Some different campaigns have warned about the risk of excessive sugar consumption. Even big companies have decided to develop some campaigns (this video is an example, in the british webpage of a popular Cola soft drink). Low calories versions and the big and clear label helping the consumer to make a responsable decision are their main argument.

An initiative for consuming less sugar: adding to the label the equivalence in minutes of exercise necessary to burn the calories input. According to the study Potential Effect of Physical Activity Calorie Equivalent (PACE) Labeling on Adult Fast Food Ordering and Exercise, if including this information the consume of this kind of caloric food will be dramatically reduced.

“Hidden sugar” and soft sugar drinks have caught the attention of several countries, and politicians are deciding how to establish a tax to reduce its consumption. In France, a tax has been applied since 2011, with 7,16 euros for each hectoliter.

In UK, sugar tax is about to come. Its final purpose will be reducing the consumption (drink and food) in youth people. That measure will imply the increase of the surveillance.

Reducing sugar consumption implies short-time benefits, according to an study publish in the magazine Obesity (see authors in link) Researchers reduced the sugar consumption in 43 children for 10 days (lowering its percentage from 28% to 10%) and replaced it for another sort of carbohydrates.

After reducing sugar consumption in the children diet, the result was a decrease of blood preassure, lactate levels, colesterol, tryglicerides (and in only 10 days). The glucose tolerance has increased, and the weight was reduced (from 200 to 900 gr depending on the individual).

How much “hidden sugar” are we eating each day? Here you could find an illustrative fictional video to see how much sugar are we ingesting without being aware of.

Injuries in the Achilles tendon