Floris Goes, PhD Candidate Sport Sciences and Physiotherapist, states that new interventions like percutaneous electrolysis can be very promising in the treatment of complex pathologies like tendinopathy. Often these interventions are introduced and even widely used in physical therapy before a large body of evidence exists. Regarding this, physical therapists frequently use different treatment protocols and forms of application while there is no certainty about which protocol is superior.

In that context, investigations such as the comparative study performed by Padron-Benitez and Rojas-Mederos (2016) are very important. This study aims to answer relevant questions by comparing different treatment protocols. Physical therapists tend to value these sorts of studies highly because of their direct practical implications. However, it should be noted that the study by Padron-Benitez and Rojas-Mederos (2016) has severe limitations and its outcomes should be interpreted with caution.

In table 1, limitations (risk of bias) of the analyzed study are brought forward::

Table 1. Main bias of the study

In order to draw these conclusions, evaluation has been performed as follows:

In order to objectively assess the quality of this study, two quality assessment tools have been used in this critical review.

Detailed scores are shown in table 1 and 2, and the most severe limitations are outlined in the paragraphs below.

PEDro scale score obtains 5 out of 10, as shown in the next table. 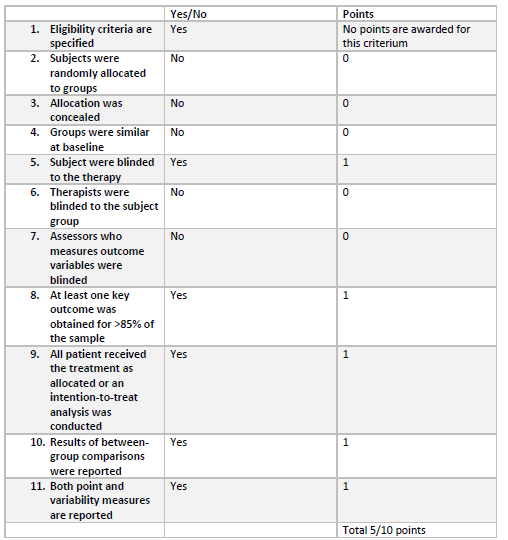 Therefore, the study by Padron-Benitez and Rojas-Mederos (2016) achieves a low – medium score on both instruments.

The most severe limitations are outlined in the paragraphs below.

The most significant limitation of this study is its internal validity, attending to scores provided in table 2 and 3. Severe risks of bias are present in the study due to its design, sampling methods and data collection.

The sample size of 13 patients (17 tendons) is clearly very small. Since the authors did not conduct a power analysis prior to the study, it remains unclear the reason why they chose this sample size. The fact that significant effects are not found could be due to low power, or just because these effects are not actually present. But more importantly, a sample size this small exponentially increases risk of bias. If there are only 6 or 7 people in a treatment group, the impact of only one participant responding very well or very badly to a treatment condition can already heavily impact the group means. Therefore, instead of detecting group effects, the authors of this study might as well just have detected outliers. This severe risk of bias is further enhanced by the fact that the baseline characteristics of both groups vary greatly. The authors did not provide any baseline comparisons on both groups, yet it can be calculated that these effects are absolutely present. If taken into account the number of involved tendons per included participant as weighting factors, the mean age in group 1 is 4,6 years higher compared to group 2 and the mean duration of symptoms is a staggering 24,1 months higher in group 1 compared to group 2.

This event brings up another limitation of the study: the generalisability of the results. It becomes very questionable whether or not the participants included in this study can be regarded as sample representing the population with patellar tendinopathy complaints. The study fails to provide details on the diagnostic process and diagnostic criteria, therefore, there is indeed no manner to know if the sample is representative or not. Besides, a mean duration of symptoms of 4- 5 years is very long and thus generalisability of findings remains doubtful.

In addition to that, another limitation of this study is the follow-up and the included outcome measures during follow- up. The authors choose to use ultrasound, VAS and VISA-P scores to assess the effects of the therapy after 3 and 6 weeks. Strong significant results are failed to be found, which is not surprising, giving the length of follow-up and outcomes measures chosen in the design. The recovery process of tendon healing is a truly long process which can take up to 12 months (Sharma & Mafulli, 2006; Khan et al., 2000). If the hypothesis of the authors was correct and electrolysis caused the start of a regenerative process, morphological changes would not be expected in the first 6 weeks. These changes would only be present after 3 – 6 months (Sharma & Mafulli, 2006; Khan et al., 2000). The only changes expected after week 3 and week 6 are clinical changes in pain experience and load tolerance. Obviously, these changes can be measured with the VISA-P and VAS, but since no longer follow-up measures are conducted there is no chance to say if these changes are the result of placebo effects or if they are actually present.

In order to continue appraising this critical review of the study, an increasing number of limitations can be highlighted such as:

Nevertheless, the most important limitations are already drafted in detail above.

This article was published in an unindexed journal without an impact factor and, as a consequence, the real scientific impact becomes null and void.

To summarize, practitioners in the physical therapy field should interpret this study as a whole with severe caution, with special attention to the high level risk of bias. Although the idea to compare protocols seems appealing at first glance, a multicentre study design with a much larger sample, follow-up of at least 6 months, randomization, and a properly described diagnostic process is necessary to actually demonstrate effects of different  treatment protocols.