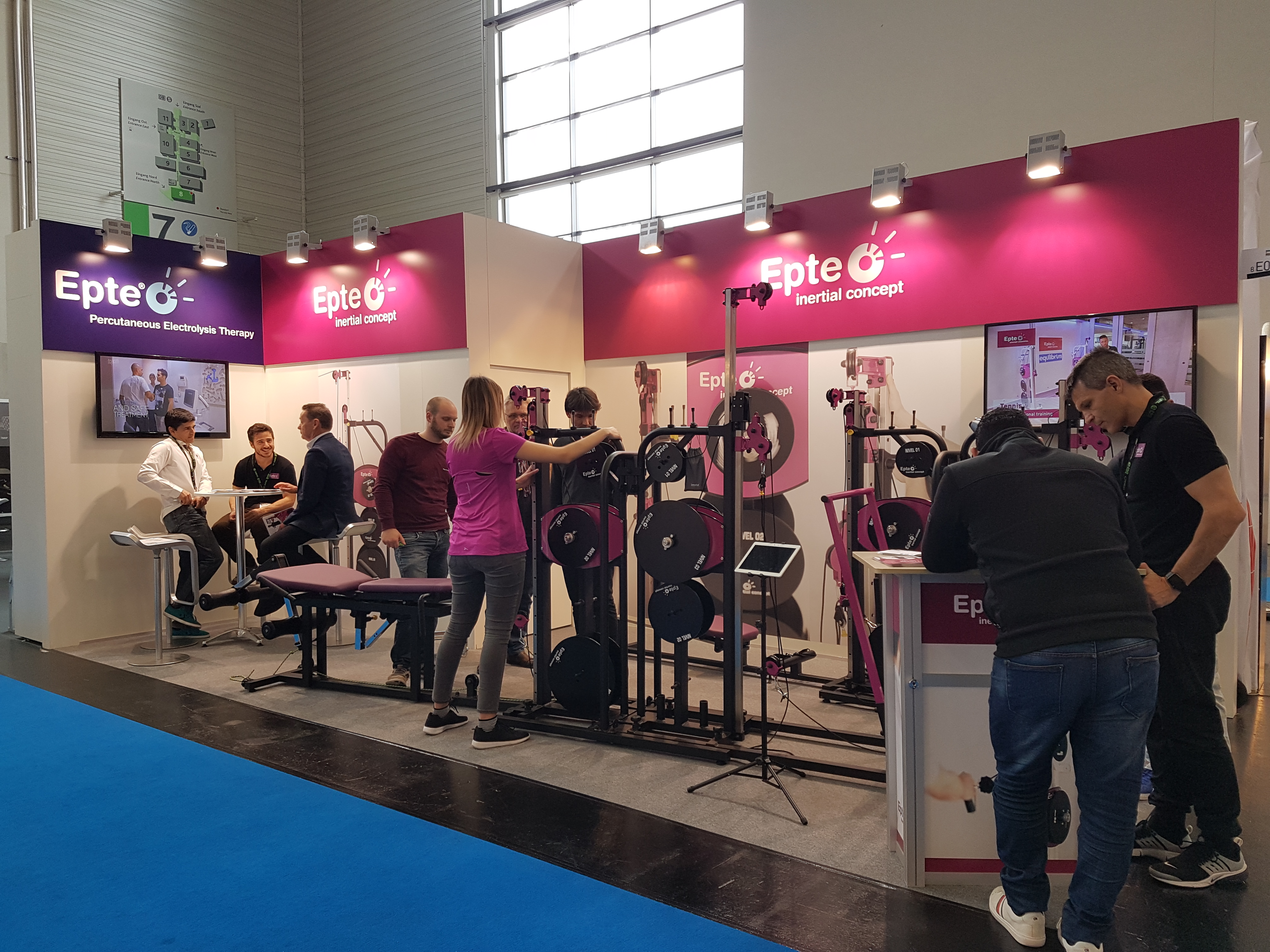 FIBO 2017, the fitness convention leader in Europe and known all around the world has come to its end and the EPTE® team is back to our headquarters in Valencia. They have been 4 challenging and exciting days, full of visits and interest, questions and answers, new ideas and some gratifications. We come back home happy and with a lot of ideas in our head, looking forward to accomplish them!

The 2017 edition of FIBO, according to the fitness professionals, has been one more time an edition full of inspiration and news to consider for the future and to eventually plan to insert to one’s work routine.

One of the main characters on the convention has been the functional training that gains more and more followers and fans every day.  Among a lot of tools, instruments and features for this kind of training, the device EPTE® Inertial Concept stands out. It works with a flywheel to generate the perfect load for every exercise you want to do.
EPTE® Inertial Concept, thanks to its versatility and adaptability, is the perfect device to perform a functional training with eccentric overload, good to prevent injuries, rehabilitation of sports movements, as well as for bodybuilding.

Day 2 in #fibo2017 with visitors from different countries and great interest in the #epte #inertial device and the data encoder pic.twitter.com/4IYWQ6cqZc

EPTE® shows at FIBO 2017 both its device for Percutaneous Electrolysis Therapy EPTE® System and all the EPTE® Inertial Concept range of products.

The EPTE® Inertial Concept device, thanks to a flywheel, allows the user to do an inertial work in a wide range of movements and intensities. It is a versatile tool that increases the training possibilities. Its versatily and the difference from other similar devices were two of the characteristics that surprised the most the visitors at the convention. 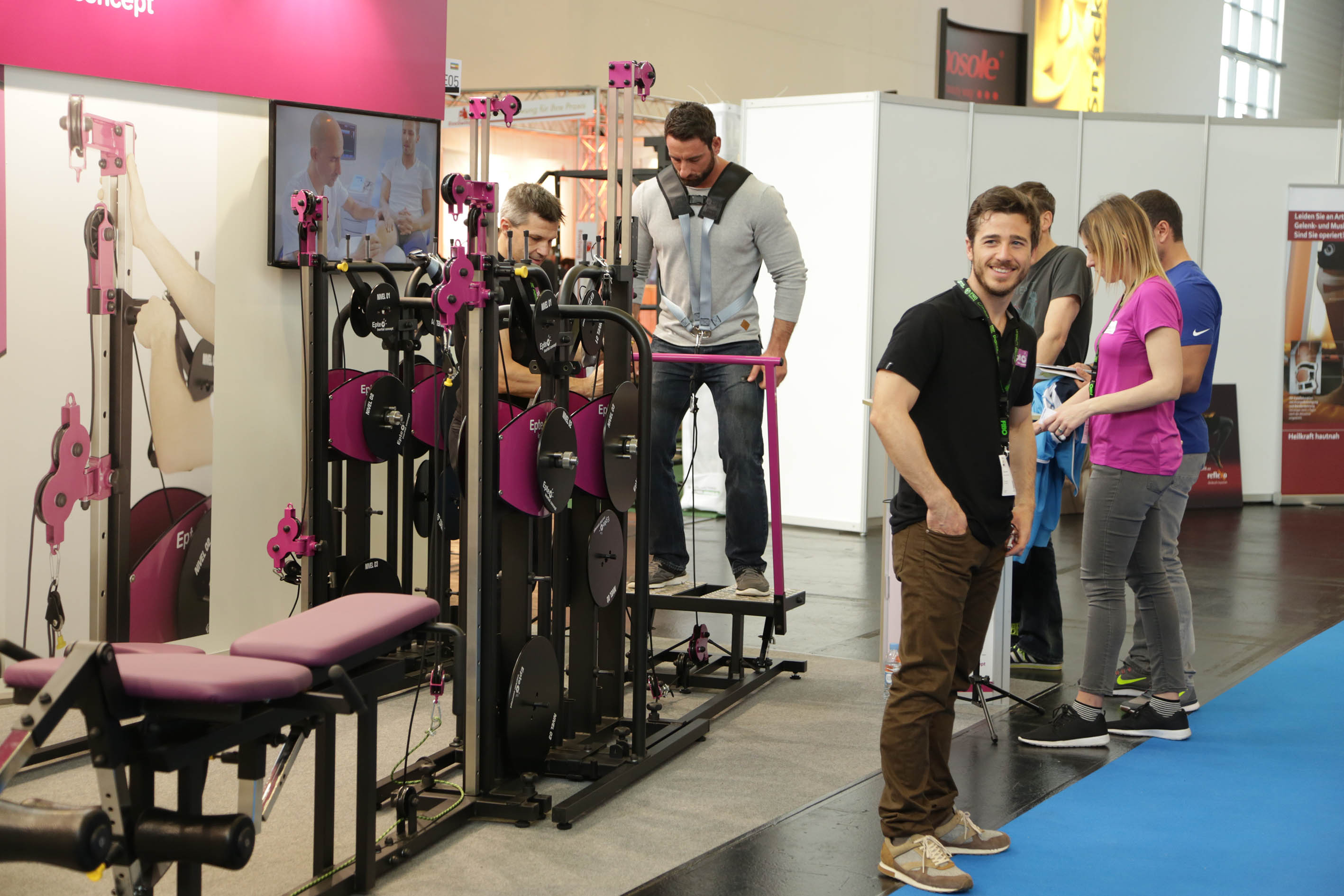 Stand of EPTE inertial concept in the FIBO Convention Cologne 2017

EPTE® Squat. EPTE® Inertial Concept is a modular device that allows the user to add different complements, among them the EPTE® Squat to perform squats. One of its biggest advantages is the possibility to tilt the platform, to work with differents positions; this is a great tool to treat tendons injuries, such as the Achilles tendon or the patellar.

EPTE® Leg Curl. This complement allows you to perform inertial work both in harmstrings or femoral biceps, setting the seat and the backrest in two different positions. It is a complement mainly used in physical rehabilitation.

EPTE® Row. It is another of the modular elements of EPTE® Inertial Concept that increases the work range and the possibilities of the main device, allowing the user to exercise with inertial training.

EPTE® Encoder. Ionclinics took benefit of this important international convention to introduce its data analysis device. The EPTE® Inertial Concept device allows the user to measure, score and compare a big amount of data about the user’s training. It exponentially multiplies the possibilities of work with inertial devices.

EPTE® Percutaneous Electrolysis. EPTE® has more than 850 official centres around the world and a lot of visitors from different countries showed interest in this treatment therapy.

During the 4 days of the FIBO convention in Cologne, different profiles of visitors, from distributors to producer, from researcher to fitness professionals, to regular users, from more than 30 different countries of Europe, Asia, America and Africa. The interest on EPTE® Inertial Concept and its data analyser device was big, as it is an innovative product.

The balance of the participation of EPTE® Inertial Concept and EPTE® Percutaneous Electrolysis, products of Ionclinics was definitely positive. We got in contact both with distributors and clients and had the opportunity to introduce our innovative products to a high impact showcase, such as FIBO 2017, with more than 150.000 visitors in its 4 days of celebration.

If you want to know more about our device EPTE® Inertial Concept, visit our website:
http://isoinercial.electrolisisterapeutica.com/en/

You may also find interesting:

Inertial exercise and its 10 most important benefits